Sign Up To Get The Full Course Right Now!

Yes, I am ready to get started today!
* we will not spam, rent, or sell your information... *

Watch the best full presentation of our scientific data, from a keynote delivered for the Society for the Anthropology of Consciousness, a division of the American Anthropology Society, 2018 conference.
Just want to quickly scan through some of the data? You can download a PDF of the presentation by clicking here.
Watch an earlier presentation of the data from the Society for Consciousness Studies annual conference at Yale University in 2015.
Fundamental Wellbeing Continuum 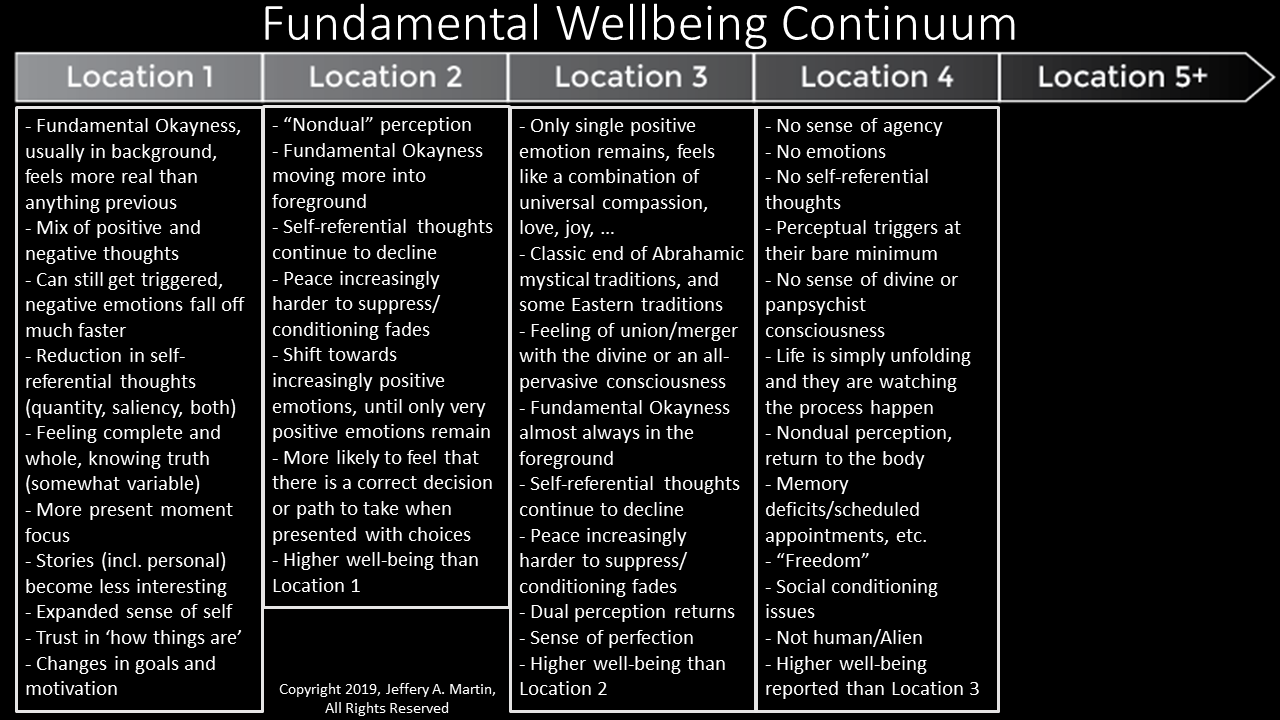 The Next Challenge Begins August 2nd!
Register Now To Ensure Your Seat!

A Very Brief Look At Some Data: 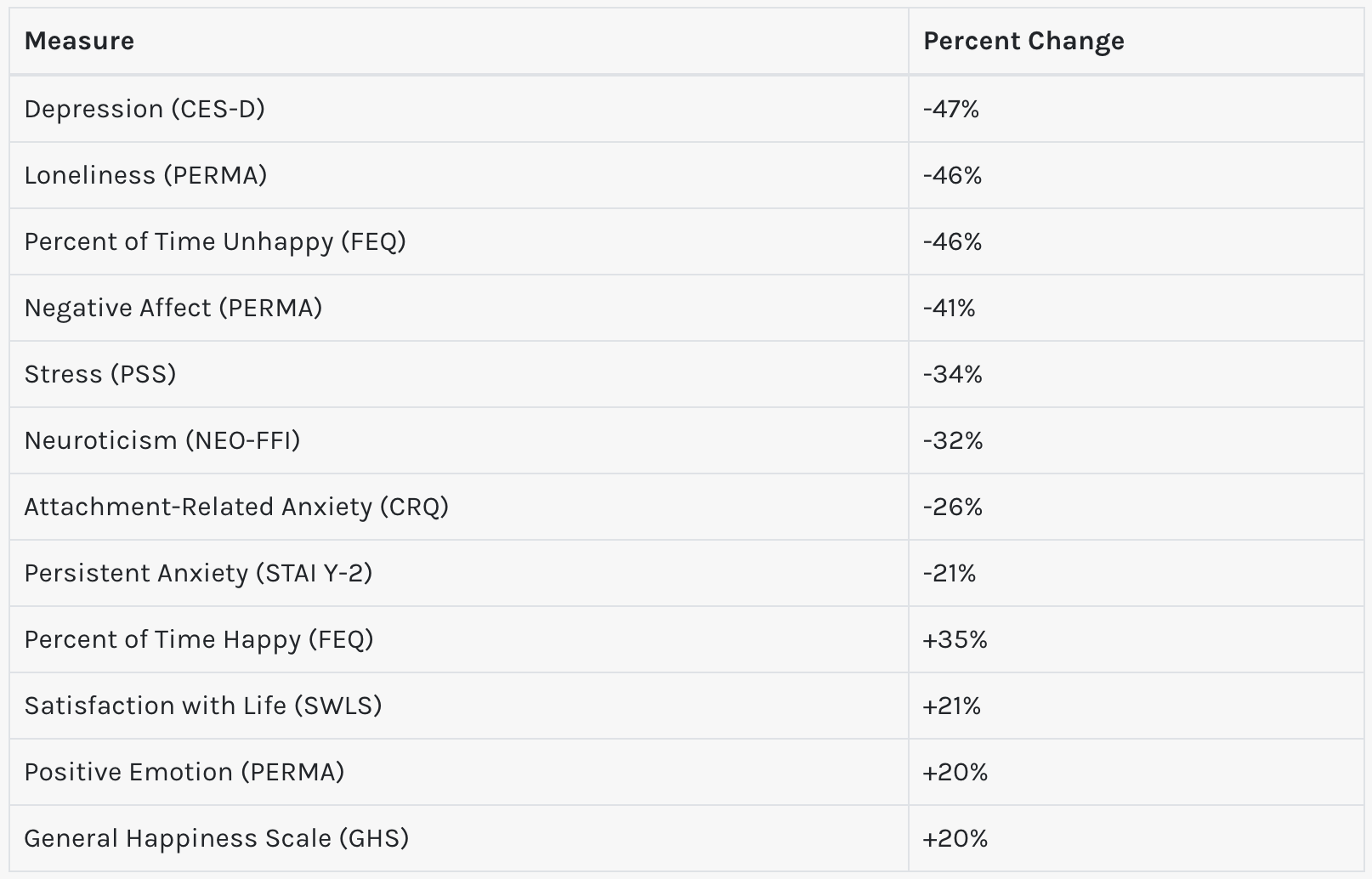 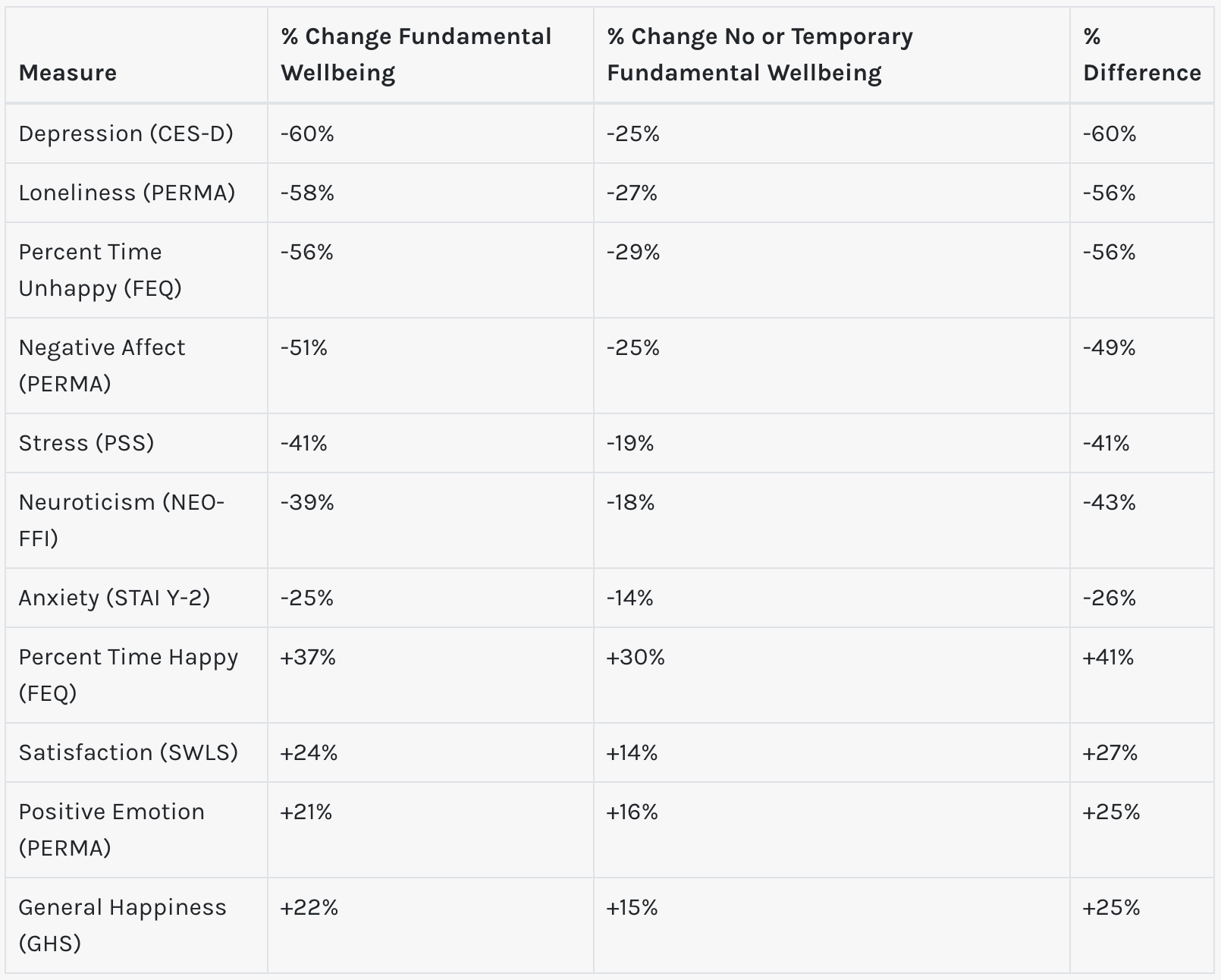 In addition to using gold-standard psychology questionnaires, participants were also asked some general questions, such as if they had more inner peace after the program. The results from some of those questions are in the table below. These numbers are not the amount of increase, just the number of people that reported more or less of a given experience as a result of the course.
Top percentage categories for all participants who completed course 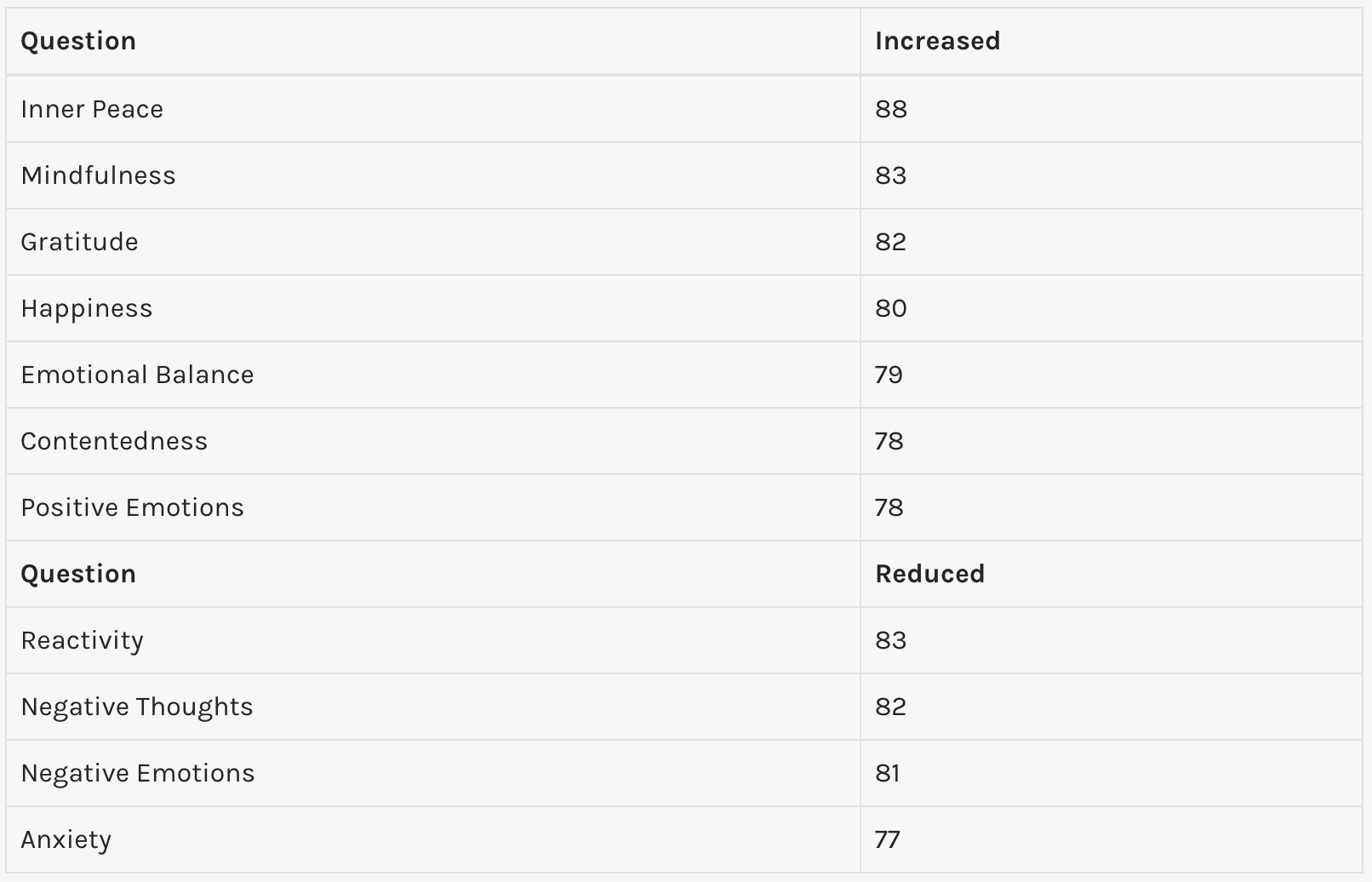 We were fortunate to have this project be the first in modern history that could reliably, safely and rapidly produce a transition in such a high percentage of people into Fundamental Wellbeing, and thus allow tracking the before and after changes. No matter how this data is examined, it is clear that these are two groups of people who are experiencing the world through very different internal lenses. Both groups improved significantly across major scientific measures of wellbeing, emotion, personality, and more. In fact, if the experimental protocol had only produced the changes seen in the group that did not report Fundamental Wellbeing, it would have been a smashing success.
As incredible as the changes for all participants were, the results reported by Finders across the entire spectrum were significantly and measurably higher. It’s completely clear which group you’d want to be in, given the opportunity. The good news is that you can be!

The 45 Day Protocol Challenge and Experiment

The Finders Course was truly a phenomenal experiment, and is no longer available. From a practical standpoint, there were a few problems with it. Namely, its length and cost, didn't allow most people to be able to take advantage of it.

However, offering the Finders Course revealed an interesting pattern in its data. It turned out that of the 70% of people who transitioned using it, about 60% transitioned by using only a small subset of its methods. For years we wanted to run another experiment with a modified protocol that focused on this to see how it would go, but we never had the time.

Then the COVID virus hit, and the entire world shut down – including all of our laboratory experiments. Suddenly we found ourselves stuck at home, with plenty of time. It wasn’t long before we identified this as the perfect moment to run this experiment.
We settled on a protocol that compressed the first 10 weeks of the Finders Course protocol down to 6 weeks. Small groups and their meetings were eliminated, and replaced with a cohort wide Facebook group. A number of practices were made optional or eliminated altogether. What remained was an even simpler, 10 session protocol that we initially called the 45 Days to Awakening Challenge and Experiment. The latest and most powerful version of this protocol is the Next Level Challenge.
We sent out a very candid email to our mailing lists, unsure if anyone would even want to try it. Why would a bunch of people who could take the world’s most proven protocol (the Finders Course experimental protocol was still available at that time) want to give this one a try?
Sure, we were subsidizing it so it cost 83% less, and it only took 6 weeks rather than 4 months, but compared to the Finders Course protocol it was unproven.
To our surprise, hundreds of people replied and joined the waiting list to enroll. We were even more surprised at how many of them were former Finders Course participants who just wanted to give it a try, or existing Finders who were sitting at home because of the virus and thought it might be interesting to explore.
About 65% of people who participated in the first few cohorts of the experiment transitioned to Fundamental Wellbeing. This is remarkable when you consider that about 70% of participants transitioned during the 4 month long Finders Course experiments.
The overall results from the 6 week experiment were clear, and in many ways as surprising as the original Finders Course results. They reveal that a 6 week, online, at home program can not only have a remarkable impact on someone’s wellbeing, but also be highly effective at persistently transitioning people to Fundamental Wellbeing.
Our full results from both studies have completed peer review and are forthcoming from the APA's Psychology of Consciousness journal. Academic good practices do not permit us to provide more detail on this website prior to publication, however you can read a pre-print of that paper on our research center's website here.
We've since gone on to improve the protocol even more, with 70-80% of people in a given cohort transitioning within 12 weeks of when they began to use the protocol. In addition, over the past year and a half we've extensively examined what limited the others, and have created optional programs for them that bring the success rate as high as the upper 90%'s. In nearly all cases, there truly seems to be no reason for a seeker not to become a Finder using these research-based protocols.

What Others Say About the Research:

"Dr. Jeffery Martin and his colleagues have produced a landmark study, one not only relevant to transpersonal psychology but to psychology in general.  It is not often that rigorous research can be inspirational, but Dr. Martin has come through."

Ph.D., Professor of Psychology at Saybrook University; past-President of two and Fellow in five divisions of the American Psychological Association, and winner of its lifetime achievement award for Distinguished Contributions to the International Advancement of Psychology; 50+ year veteran researcher and pioneer in the scientific study of consciousness
"Dr. Jeffery Martin's work on non-symbolic states of awareness has helped create the most lucid map for understanding higher states of consciousness."
"I have personally gained a deeper understanding of the universality of human sacred experience from his research and have been able to replicate and publish it. For anyone who is interested in getting scientific knowledge of the range and evolution of human experience in the direction of expanded awareness and ultimately that which wisdom traditions call 'enlightenment' Jeffery's book and research are must reads."

What Other Participants Say in Their Own Words:

We have hundreds of case studies like this from research program participants over the years. Use the button below to see the rest.

Join the Next Level Challenge

Due to the nature of the program, we can only bring on so many participants at once, so we run the program in cohorts.
Use the button below to learn more about the program requirements, and apply for the next cohort of the Next Level Challenge.
The next challenge begins October 2nd!
Register Now To Ensure Your Seat!